There is a rich heritage of Black history all around us to explore. Black History Month however often finds people returning again and again to the same figures and places. Martin Luther King Jr., Selma, Alabama, and Fredrick Douglass to name just a few of the top contenders. Great as they are, they represent a fraction of the amazing people and places that have impacted the state's and the nation's cultural landscape. For 2022 how about delving into New York's Black history by visiting locations in person or digitally. Here is a taste of what you can do to meet some new faces and places.

The state offers a variety of gateways into the legacy of African Americans and current happenings. Using the state's parks, historic sites, the State Historic Preservation Office, I LOVE NY's Paths Through History

Meet the Faces and Places

Below is a sampling of both destinations within the state park and historic site system as well as a number of historically significant sites in communities across New York that help preserve and champion these vital stories.

Marsha P. Johnson State Park in New York City: Renamed for a dynamic pioneer in the LGBTQ+ fight for equal rights and for transwomen of color, this seven-acre state park in Brooklyn offers a riverfront view of Manhattan and an opportunity to relax in a place where everyone is welcome.
Marsha P. Johnson State Park
Note: the park is undergoing extensive renovations including the installation of public art honoring Marsha P. Johnson and the LGBTQ+ community. Some areas of the park will be temporarily limited during construction to be completed June 2021. The north section of the park will remain accessible through neighboring Bushwick Inlet Park.

Sojourner Truth at Walkway Over the Hudson State Historic Park, Poughkeepsie/Highland: Although many people think she was from the South, Sojourner Truth was actually born and raised in Ulster County and grew up speaking Dutch. In August of 2020, a bronze statue of her was unveiled at the main entrance of Walkway Over the Hudson, in Highland, NY. You can visit her statue there and learn more about her life and Vinnie Bagwell, the sculptor who created her. Have You Met Sojourner Truth?

Schuyler Mansion State Historic Site in Albany: In 1793 a good portion of the City of Albany burned down. Three enslaved Africans were accused of setting the blaze. What are people thinking? How do they feel? In this fictionized drama based on historic evidence, see how the community of enslaved and free, African and European manage this tense time. The Accused: Slavery and the Albany Fire of 1793.

Crailo State Historic Site in the Capital Region: Pinkster, the oldest and first documented celebration enjoyed by enslaved and free Africans and their decedents well into the 19th century was popular not just in Albany but throughout the region. Learn more about this exciting event and start planning now to celebrate this May. Blogpost: Reviving a Dutch Holiday with African Flavor.

Fort Ontario State Historic Site in Central New York, was the training ground for the Harlem Hellfighters. Military prowess and racial segregation went hand in hand during World War I. In spite of many obstacles African American men answered the call and served their country victoriously. The Harlem Hellfighters were one such outstanding group. Begin your journey into their fascinating story at: Fort Ontario's Face Book page 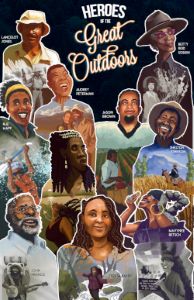 Jones Beach Energy and Nature Center on Long Island: The Center will feature profiles of African American leaders in STEM (Science, Technology, Engineering and Mathematics), outdoor education, and environmental justice alongside books, an interactive map on the segregation of school districts across Long Island, and a participatory display that invites young people to write down what they want to be and post it on a board for others to see. They will also screen The Falconer, a documentary film about Rodney Stotts, an African American falconer who grew up in Anacostia, the home of Frederick Douglass. The film will be available on the Center's website (jonesbeachenc.org

IMAGE: Heroes of the Great Outdooors.
One of the many Black History posters on display at Jones Beach Energy and Nature Center
Artist: Eren K. Wilson

National Register of Historic Places Black history is an essential part of understanding New York State in the past and present. Through scholarly research, the National Register of Historic Places program offers an opportunity to take a deeper look into the people and places that have shaped the Black experience in New York. The following list includes some of Park's most recent listings associated with lives and experiences of Black New Yorkers. We invite you to access the nominations and discover more about the people and places that have shaped our history.

Sag Harbor Hills, Azurest & Ninevah Subdivisions (SANS), Sag Harbor, Suffolk County The Sag Harbor Hills, Azurest, and Ninevah Subdivisions (SANS) Historic District, is a mid-twentieth century African American beach community on Long Island that has and continues to serve as a retreat created by and for families of color. Famous individuals who summered at SANS included Langston Hughes and Lena Horne. The district's stewards are the recipients of a 2019 NYS Historic Preservation Award. Sag Harbor Partnership

John W. Jones Museum, Elmira, Chemung County The Museum commemorates the life and work of John W. Jones, who self-emancipated from Virginia and settled in Elmira in 1844. As an Underground Railroad station master, he safely assisted 800 freedom seekers to flee to Canada. Later, as sexton of Woodlawn Cemetery, he was responsible for the meticulous and caring burial of 2,973 Confederate soldiers who died in the Elmira Prison Camp, one-fourth of its population. Following his work, Woodland Cemetery located across from Jones' home, became a National Cemetery in 1877. Jones' home was saved from razing in 1997 and is listed on the State and National Registers. The museum is open for public tours. John W. Jones Museum

Buckhout-Jones Building, Oswego, Oswego County The Buckhout-Jones Building in Oswego is an important commercial building listed in the State and National Registers of Historic Places. The building was once associated with Charles Smith and Tudor Grant, both formerly enslaved people from Maryland who sought refuge in New York State and operated barbershops in this building and now serves as the Children's Museum of Oswego.

National Headquarters, March on Washington, Manhattan, New York County This Harlem rowhouse at 170 West 130th Street served as the National Headquarters for the March on Washington for Jobs and Freedom, an epic and meticulously planned event held on August 28, 1963. A quarter-million African Americans gathered here peacefully, asking for the basic rights of citizenship, as well as for Martin Luther King Jr.'s "I have a dream" speech, which culminated the assembly. The march inspired citizens and is credited with helping to spur passage of the Civil Rights Act of 1964 and the Voting Rights Act of 1965. The building is featured in the NYC LGBTQ+ Historic Sites project.